For Ages 9 and up 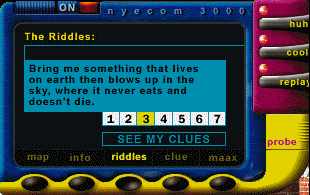 
Content
A giant meteoroid is hurtling through space toward Earth. Unfortunately, the computer controlling the newly installed meteoroid and asteroid exploder or MAAX, defense system has developed a HAL-like personality, and refuses to stop the approaching rock unless someone answers seven science riddles. [Emmy Award winning] Bill Nye and his team of scientists (including the rock expert "Sam Andreas", and the marine biologist "Sue Nami" ) have been called on to answer Mad Maax' riddles.

The program begins as the user enters Bill's offices at Nye Labs. The building is packed with interesting machines and devices that, through virtual exploration and manipulation, will help the user learn about science.

The task at hand is not a simple one, however. The riddles are obscure, and the user is not permitted to solve them until certain science facts have been uncovered. One parent with a background in science noted, "I thought I could probably solve most of the riddles off the top of my head. Wrong!" Nonetheless, our teacher reviewer thought that "nine and up is perfect for the concepts covered."

Information must be obtained through experimentation. Exploration and observation are key at Nye Labs. Clues are meant to make the user think. Some guidance is provided to the user via the Nyecom 3000, a sort of pocket communicator that retains the riddles, delivers messages (in the form of mini lectures) from Bill and his team, alerts the player when he or she is on the right (or wrong) track, and (thankfully for the spatially challenged) includes a map to help the user find things within Nye Labs.

"The best part of this software is that it makes learning fun," said one 11 year-old girl reviewer. The virtual reality-style graphics are pleasing, although the audio and video were not always in synch on our test machines. Humor abounds, and Bill Nye bubbles with enthusiasm for his discipline. His puns, antics and corny one-liners would make a vaudevillian jealous.

Ease of Install/Use
Installation on our test machines was straightforward. Our only concern was that during the installation on a PC, the program did not ask if we objected to its plan to install QuickTime for Windows 2.5.

Methodology
This software teaches science through exploration and observation. Although the path to learning is well-planned through experimentation as well as instruction, the player is not lead in an obvious manner. Information is not passively obtained - it must be discovered. In this way, the program not only teaches science principles and facts, but also scientific methods — observe, hypothesize, test, and conclude.

Proxy Parent Value
Because of the lack of initial guidance provided by this program it proved to be frustrating for even some of our older reviewers. One parent commented "I roamed around Nye Labs for an hour before I finally figured out what to do!" A younger or less patient child may want to give up after initial exposure to this software. Parents will want to be available for consultation and mediation, especially with younger children.

Best for. . . .
An older child who is interested in science and not easily frustrated. A child who is a fan of Bill Nye's public television series will also have a natural affinity. It is not for a child with a short attention span, or one who needs immediate gratification.

Bottom-Line
Stop the Rock provides a fun and challenging approach to learning science concepts covered at school - and in today's news.