For Ages 7 to adult

See also the Summary Rating Table for comparisons with other Critical Thinking software titles, and the SuperKids Buyers Guide for current market prices of PC and Mac versions. 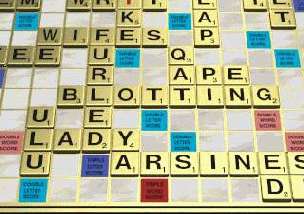 
Description
In the search for software that captures and holds the interest of an older child, male or female, there is always the new-twist-on-an-old-favorite variety. Included in this category is the ever-popular and unarguably-educational classic Scrabble.

For the most part, this game plays like the standard board-game version of Scrabble. Players form interlocking words vertically and horizontally on the screen using letter tiles of varying values . Before play begins, the user chooses from multiple game-options. Standard play supports up to four participants. The user can also choose to play against the computer "Maven", against a player on another computer, against an internet opponent, or simply let the computer play against itself and watch the words fly. Challenge levels ensure that even champion Scrabble players compete at an appropriate level of expertise.

Ease of Install / Use
The program installed with ease on Windows 95. Basic use was intuitive, both for conventional board players, and novices.

The manuals included with the reviewers' software were incorrectly compiled, with certain pages duplicated, and others missing. Attempting to obtain the correct manual proved to be a lengthy undertaking. An on-screen version of the manual does, however, exist within the program.

One of the features of the program, play via modem or across the Internet, proved impossible for any of our reviewers to enable. Internet play comes in two flavors: with the use of a downloadable software tool from a third-party company, or across the net with a friend whose IP address is known to you.

Educational Value
Decades of play affirm that word-games strengthen the vocabulary, while sharpening the wit. Dictionaries come off the shelves, brains are taxed, minds engaged. This program's inclusion of "hints" and "definitions" options provides additional exposure to new words and their meanings.

Kid Appeal
Scrabble still holds major appeal for word lovers, young and old. Before computers, enthusiasts were known to play solitary games, challenging themselves to defeat their uniquely cunning adversary. Now they can play against the computer generated "Maven", an intriguingly mysterious, but not necessarily omnipotent, opponent.

SuperKids' parent reviewers enjoyed playing this game with their children--comparing vocabularies with the younger generation. "Once, I thought I had invented a word," commented one child reviewer, "but it wasn't challenged by the computer, so I looked it up and found its definition."

Best for... / Bottom-Line
This program appeals to word-game lovers who appreciate the value of a tried and true winner.

See also the Summary Rating Table for comparisons with other Critical Thinking software titles, and the SuperKids Buyers Guide for current market prices of PC and Mac versions.