See also the Summary Rating Table for comparisons with other girls software titles, and the SuperKids Buyers Guide for current market prices of PC and Mac versions. 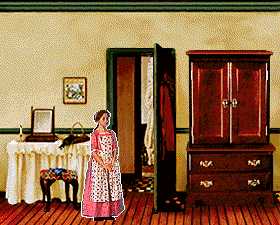 
Description
Based on The American Girls Collection, the popular line of books, dolls and accessories from Pleasant Company, The American Girls Premiere is a creativity program that invites girls to develop and produce their own plays. Each play stars one of the five American Girls characters, and is patterned after situations found in these historical fiction books.

To create a play, the user first chooses which of the five characters or 'time periods' to use. At this point the stage is set as the user/director specifies settings, additional characters, costumes and props. Next, drama is introduced to the scene. Live-action video characters move around the set, actions and emotions are inserted, and finally dialog is produced to complement and complete the scene. At this point, the user can add sound effects and ambient music, and can adjust the stage lighting. Synchronizing the many variables is a bit awkward, especially for the beginning user, but the overall effect is delightful. Completed productions can be formally screened to the fascination of admiring viewers.

On-screen tutorials are included with the program to encourage and train the novice user. Also included are sample plays, which help spark the young imagination.

Ease of Install / Use
The American Girls Premiere installed without difficulty on our test PC running Windows95. Since we looked at a pre-release version of the program, we were unable to test it on Windows 3.1 or Mac systems.

Educational Value
Not only does this program give a child a creative outlet, allowing her to write her own scripts and produce her own 'premieres', but it also teaches and strengthens computer skills as well as video-editing skills. Users modify scenes; insert dialog via text-to-speech or actual voice-recording; choose lighting, music and sound effects; and make final edits before displaying the production.

Kid Appeal
Although The American Girls Premiere appears overwhelming at first glance, with a little time investment girls as young as nine can learn to create and produce satisfying performances. Acquisition of the skills needed to fully utilize the program requires time and focus. This is not the kind of program that a child can expect to master immediately, and may require adult guidance and participation. Some SuperKids' reviewers expressed a lack of interest in the program because it was "too complicated". Those who chose to spend time with the program were delighted with their creations. Adding dialog to the play was the favorite option--allowing users to develop and rehearse their own thespian skills.

Best for... / Bottom-Line
This program is best for young girls who are already acquainted with and fond of The American Girls Collection products, and who have the patience and desire to learn to manipulate the many computer editing tools used in the program. Parents will appreciate the fact that this program appeals to the pre- and early-teen population without focussing on dating, make-up, or clothes.

See also the Summary Rating Table for comparisons with other Girls software titles, and the SuperKids Buyers Guide for current market prices of PC and Mac versions.