See also the Summary Rating Table for comparisons with other Interactive Books, and the SuperKids Buyers Guide for current market prices of PC and Mac versions. 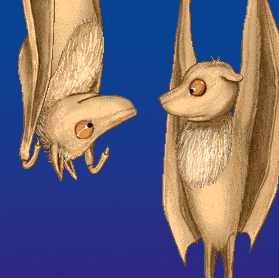 
Content
Stellaluna is the enchanting tale of a baby fruit bat, lost by her mother following an attack by an owl, raised by a family of birds. No, this isn't an aviary version of Tarzan. Rather, it is a story of adaptation, acceptance, and friendship.

This young bat is a rational survivor. Faced with mounting hunger, she decides to accept the unusual food offered by her step-bird mother -- a live caterpiller. And when she's told that she must do as the other chicks and sit in the nest, rather than hang from it, she complies.

But Stellaluna's new life isn't all one of compromise and change. Her three young nest-mates become close friends, learning to share in their common abilities, and marvel over their differences.

Some interactive books are highly edited and abridged versions. Not Stellaluna. This is a complete, animated rendition of the best-selling 1993 book by Janelle Cannon. And for good measure, the program comes with the illustrated paperback version of the story.

Ease of Install / Use
Stellaluna installed without difficulty on our reviewer's PCs and Macs. Actually, on a Mac, there isn't really an installation process - the program runs entirely from the CD. No problems were reported in use - this is a well-designed, intuitive program.

Methodology
Stellaluna follows the style and format common to this software category. The user is given the choice of passively watching and listening, or playing along. In the passive 'read to me' mode, short sections of text appear on screen, with words and phrases highlighted as they are read by the characters.

The interactive choice enables a click-and-explore capability that intrigues young pre-readers. "My 4 year-old son has been drawn to the computer in a way unimaginable before he tried this program," reported one of our parent reviewers. He had read the book before, but the program made it come alive for him." Users can easily toggle between the two modes.

Stellaluna contains an interesting 'Bat Quiz" section, where the user can learn some basic (and some unusual) facts about bats. Questions range from "do bats have bones?" to "where do bats come from?" Our kid reviewers all liked this feature - but we had one quibble. The program provides great answer explanations - IF you get the answer right! If you answer incorrectly, the program says "try again" but doesn't give the user a chance before moving on to another question.

Proxy Parent Value
Proxy parent value is SuperKids measure of a program's ability to capture and hold a child's attention. Stellaluna was a big hit with our kid reviewers, drawing them back repeatedly, even for those who had previously read the story.

Best for...
Stellaluna is best suited for pre- and early readers who like warm, feel-good stories.

Bottom-Line
This is a beautifully done version of what is destined to be a classic children's story. Will it teach your child to read? No - but it should enhance a pre-reading child's interest in, and appreciation for books.

See also the Summary Rating Table for comparisons with other Interactive Books, and the SuperKids Buyers Guide for current market prices of PC and Mac versions.