See also the Summary Rating Table for comparisons with other interactive Book software titles, and the SuperKids Buyers Guide for current market prices of PC and Mac versions. 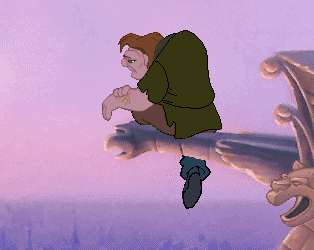 
Content
The Hunchback of Notre Dame as an animated storybook for young children?

If you're drawing on long dormant memories of the 1831 Victor Hugo novel you read in a high school literature class, or the classic 1923 silent movie version starring Lon Chaney as the bell ringer, or the 1939 Academy Award winner with Charles Laughton and Maureen O'Hara, you'll be excused for thinking Disney Interactive was short a few megabytes of RAM when they decided to make this into a software title for three to nine year-olds. Frankly, some of us thought the same thing even in the context of this past spring's successful Disney feature-length animation.

We were wrong. All those previous efforts, including the Disney film, were dark stories that portrayed some of society's prejudices and intolerances. Even though the Disney film rewrote Hugo's tragic climax into a happy ending, many parents of young children shied away from the movie. This software version of the story avoids dwelling on the dark side of the evil characters, and instead focuses on the goodness in the hearts of the story's heroes.

Disney's Hunchback of Notre Dame Animated StoryBook is the fifth in a series of programs (Lion King, Winnie the Pooh, Pocahontas, and Toy Story) that take simplified versions of their cinematic namesakes, and provide young readers with the opportunity to involve themselves as characters in the story. Gone in this program is the scary story that began with an abandoned, deformed child. Gone, too, are Frolli's lust for Esmeralda, Quasimodo's interminable suffering (other than loneliness), and the violence of the original story.

What does that leave? Surprisingly enough to make this a valuable story for children too young for the movie or the book. Even with all its editorial cleansing, a young listener or reader will see a story about human values exending beyond appearances or class. And, of course, in the tradition of all Disney animated films, that good triumphs over evil.

Ease of Install / Use
Hunchback installed without any difficulty on our test machines. On a PC, the user is only asked to pick a "normal" install, meaning on the default C drive, or a "custom" install, where the user selects the drive and directory. One thing to beware of if you have a computer with limited disk space -- this is a big installation. Almost 30MB ends up on your hard drive. (Thankfully, the software includes an uninstall icon.) The program does not require a restart of Windows after installation - a plus if you have an impatient child sitting at your side. The Mac version installed with similar ease.

We always ask our evaluators if they had reason to look at the manual during the course of checking out the software. With Hunchback, the answer was a minimal "yes." The main screen for the program presents four options (five if you include exiting the program). If you don't pay attention to the narrator's verbal directions, you may find the icons initially non-intuitive. Beyond that, our parent and kid reviewers found the program contained excellent on-screen directions.

Methodology
Hunchback offers options now common to most interactive books. The user can choose to passively listen to the story as it is read aloud (a 15 minute option), with some of the dialogue displayed on-screen as highlighted text. Definitions of highlighted words are available with a click of the mouse. The user may instead choose to read along with the program, stopping on many of the 26 screens to click and explore.

This latter path also allows the user to access six activities which allow the child to participate in the development of the story, its characters, and plot. One activity, for example, allows the user to compose and save three songs using the Cathedral's bells in an effort to cheer up Quasimodo. In other activities, the user has to help Quasimodo and Esmeralda escape from Notre Dame by finding a path to scale the walls, and then help Quasimodo and Phoebus find Esmeralda and the Gypsies hiding in the catacombs by recognizing and matching geometric patterns.

Will the program really "...improve reading, vocabulary and problem-solving skills" as the box claims? Not in the way our parent reviewers expected. This is not a learn-to-read program. Frankly, half the recommended age group will be unable to read the on-screen dialogues. But our education reviewer noted that, "Reading is more than simply decoding letters and sounds into words. Getting a child to vicariously participate in a story they have read, or had read to them, is a valuable experience for building reading comprehension skills."

Proxy Parent Value
Proxy parent value is SuperKids' measure of how well a program grabs and holds a child's attention. Although the program rated well in our initial tests with kids, we suspect it won't have the long-term appeal of some of its Disney predecessors, like Lion King and Winnie the Pooh. Much of those programs' appeal stemmed from the amazing popularity of their film versions and associated music. Hunchback doesn't seem to have the same draw with the targeted age group.

Best for...
Children too young for the film version, as well as those who liked the movie, will enjoy this program. The software is recommended for ages three to nine, but our reviewers felt that ages five to eight might be more appropriate.

Bottom-Line
Disney's Hunchback of Notre Dame is a very good interactive book, combining beautiful animation with a much sanitized version of a clasic story.

See also the Summary Rating Table for comparisons with other interactive Book software titles, and the SuperKids Buyers Guide for current market prices of PC and Mac versions.