For Ages 5 and up

See also the Summary Rating Table for comparisons with other Problem Solving software titles, and the SuperKids Buyers Guide for current market prices of the PC and Mac versions. 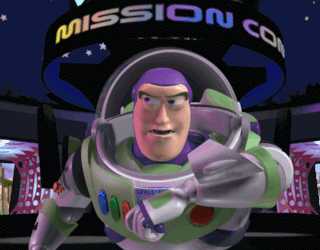 
Content and Methodology
The second of two CD's from Disney to be based on the hit movie, Disney's Toy Story Activity Center has an entirely different focus than its Animated StoryBook cousin. Where that program targeted early readers, the Activity Center provides exercises in critical thinking, problem solving, and visualization type skills. The movie's characters and setting provide the hook to capture the child's interest and attention.

The program consists of eight activities, three involving artistic efforts, one with simple addition problems, and the remainder with various pattern recognition, spatial visualization, and replication exercises. One of our kids' reviewers favorites was a variation on tic-tac-toe, called 5 in a row. In this board game, the object is to put five of your players in an uninterrupted row before your opponent achieves the same thing. What makes this version more interesting, is the animation ot the players - in particular, the green army figures from the movie. What makes it more challenging, is the off-angle, slightly tilted perspective from which the user must view the board.

Another activity popular with our young reviewers, was the Sum's Up card game. This variation on 21 is based on the sum of the discarded cards, where the object is to force your opponent to play a card which will bring the total to greater than 39.

Our parent reviewers were most impressed with the 3-D Thermocrystallic Fusion plumbing maze. In this activity, Buzz Lightyear challenges the user to help him rebuild his fusion pump by routing a series of pipes through a rotatable, three-dimensional maze [39k screen shot]. At its most difficult level, the user must not only find the correct path, but select the correct plumbing pieces to navigate the twists and turns. "This was more realistic than you might suspect, especially to those of us who've had the joy of hunting for real plumbing parts!" noted one parent.

In addition to the interactive activities, the program includes a theater where six 30 second clips from the movie are available for viewing.

Ease of Install / Use
Our reviewers found Disney's Toy Story Activity Center relatively simple to install on both PC's and Mac's, with one caveat: some of the program's impressive graphics are the result of loading almost 20MB of images and sounds onto the user's hard drive. "I loaded it on my PC without any difficulty, although my daughter became impatient with how long it took [about 5 minutes]." Fortunately, the program comes complete with an uninstall utility that allows the program to be removed from your disk when the kids have outgrown it.

Ease of use was generally well scored by our reviewers, "because of the ample use of clear on-screen instructions by the narrator." Although this might seem to make the program attractive to non-readers, the difficulty of some of the problem-solving activities, even at their lowest levels, makes them inappropriate for that age range. One criticism which was mentioned by several reviewers, was the frustration their children evidenced at times, when they had to wait for their cursor to reappear on the screen while a character was speaking.

What if you have problems? Disney continues to be an industry leader in this area, with an array of free customer service resources, ranging from 1-800 phone lines, to a fax-back service, bulletin boards, and the Internet.

Proxy Parent Value
Proxy parent value is SuperKids measure of how well a program grabs and holds a child's attention. Toy Story scored well on this scale, in most of its activities.

Best for...
This program is best suited for second-graders and above who have an interest in a variety of challenging problem-solving games, like tic-tac-toe, card games, and jig-saw puzzles. Younger children may find many of the activities beyond their ability.

Bottom-Line
Disney's Toy Story Activity Center is a impressively animated, "keep the kids busy and teach them something useful" program.

See also the Summary Rating Table for comparisons with other Problem Solving software titles, and the SuperKids Buyers Guide for current market prices of the PC and Mac versions.