For Ages 8 and above 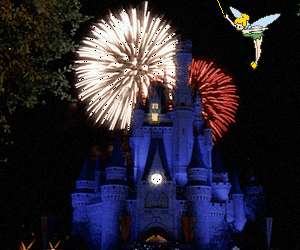 
Content
The Walt Disney World Explorer undertakes a difficult task: to try and capture the excitement and sense of wonder that accompanies a visit to one of the greatest tourist attractions in the world. WDW begins with a short audio clip of Walt Disney himself, talking about his plans for the park. The scene then shifts to a clickable aerial drawing of DisneyWorld that functions as the main menu screen for the program. Using a "TinkerBell" cursor, the user can scroll the map or see labels of all the main attractions, from AdventureLand to Epcot.

After clicking on a desired site, the scene shifts to that location where the user is presented with a video clip or a slide show highlighting the attraction. After the short description, the user may return to the main map, click to learn some related trivia about the site, or additional backround information.

In addition to these vignettes's, the program includes three or four interactive activities: the Monster Sound Game, Oceans of the World, a Quiz Challenge, and a find the hidden hats game. Our kid reviewers found the first two especially interesting. In the Sound Game, the user is given the role of sound effects director for four different cartoon/video clips. Each clip can be heard with its real sound, then the user is given a palette of 10 sound effects to create their own version. "Pretty cool," according to our nine year-old reviewer.

The Oceans of the World game begins with a more depressing concept - "see mankind's harmful effects on the oceans of the world" intones the narrator. "Click on the oil barrel or sewage pipe to see the effects of pollution, or click on the harpoon to see the effects of overfishing." After you get past the social commentary, the user gets a chance to observe and control the interactions of a simple ecosystem consisting of kelp, fish that eat kelp, and sharks that eat fish. The user can increase the number of fish and observe a reduction in kelp supply, increase the number of sharks and watch the fish population dwindle, harpoon the shark, and see the fish population grow, or pollute the water and see the entire system decline. "Although a simple system, this was a great learning experience for my daughter," noted one parent. "It provided a very clear illustration of the interaction of plants and animals in the environment, and how impacts on one element can effect others." SuperKids' staff was also impressed with the educational value of this component of the program.

Ease of Install / Use
The program installed without difficulty on our PC, albeit a bit slowly (about 5 minutes), and with the caveat that this is a big program. How big? The minimum install size was just over 9MB in size. (The recommended full install was 27MB!) We went with the smaller installation, and had no performance problems.

Moving around the program is pretty straight-forward, once you figure out that the navigation tool is just barely visible in the bottom left-hand corner of the screen. Moving the TinkerBell cursor over the tool brings it completely into view. With this tool, it's easy to bring up an index, go back one screen, go to the main screen, or exit from the program.

Proxy Parent Value
Proxy parent value is SuperKids measure of how well a program grabs and holds a child's attention. On that measure, WDW Explorer received mixed scores from our viewers. Among those who had visited Disney World, there was initial excitement in seeing and recalling experiences. Among those who had never been there, the activities were more interesting.

Bottom-Line
Does WDW Explorer truly recreate the excitement of the real thing? No. But perhaps that is too much to expect, given the incredible scale and complexity of Walt Disney World itself. WDW Explorer does provide a good overview of the park's history and attractions, in a novel interactive form. We might recommend it for a first time visitor, or for a family who has recently visited and wishes to reinforce their children's memories of the visit.